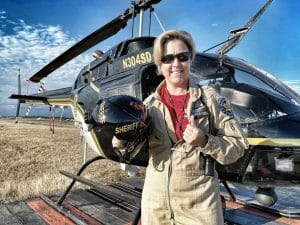 One minute she is teaching students how to become competent nurse anesthetists; the next she might be piloting a law enforcement helicopter over the vast forests of South Mississippi. Such is the extraordinary and rewarding life of Dr. Stephanie Parks.

Parks serves as a full-time Assistant Professor in the Nurse Anesthesia Program at The University of Southern Mississippi (USM), yet also manages to squeeze in part-time duty as a helicopter pilot for the Harrison County Sheriff’s Office. There is no proof that she also doubles as a movie stuntwoman.

“She was here long before me, but she is a legend in our aviation division,” said Hendry, who has worked with Parks for the past 12 years. “There is nothing Steph can’t accomplish or achieve. Her record speaks for itself. Nurse, successful military career, skilled pilot, CRNA, DNP. I’ve never heard of anyone with that record of achievement.”

Parks’ love affair with whirlybirds began at an early age during a family vacation in Tennessee.

“My first helicopter ride was at age 12 when my father rented a helicopter to fly us around Maggie Valley,” said Parks. “I remember the pilot putting me up front with him because I was too little and to make room for the massive camera I insisted on carrying. I remember thinking then, ‘I can do this!’

Parks so desperately wanted to be at the controls in a helicopter cockpit that upon graduation from high school she announced an intention to join the U.S. Army. Those countless days playing “Army” as a youngster with her brothers had only intensified Parks’ patriotic passion to serve in the military. But a mother’s plea is difficult to resist, and Parks agreed to give college a try before attempting military service. 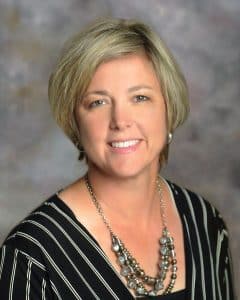 After earning her Bachelor of Science in Nursing degree at USM’s Gulf Park campus in 1996, the headstrong Parks fulfilled her teenage dream by enlisting in the U.S. Army three years later. Her primary objective: “fly big helicopters.” She underwent basic training at Fort Sill Oklahoma, graduating first in her class and earning a second-lieutenant commission at Fort Benning Georgia.

For the first 10 years of her 23-year military career, Parks piloted the famed Sikorsky Black Hawk helicopters. You know the ones – the versatile, dependable, unmistakable choppers featured in the classic films, “Apocalypse Now” and “Black Hawk Down.” Parks developed an affinity for the magnificent flying machines and the assignments that often carried her into hostile territory.

“I loved flying military missions that included air assault, multi-ship operations, paradrops exercises with the Army’s prestigious Black Knights, and night missions wearing night-vision goggles,” said Parks. “One of my deployments was to Kosovo, where we flew many hoist operations and used our Black Hawk winch capability to lower and recover our medics to wounded personnel on the ground. The landscape was too dangerous to land due to the amount of unexploded ordinances dropped in the 1990s by NATO forces.”

During Operation Enduring Freedom, Parks served as MEDEVAC commander for the U.S. Army in Kosovo and coordinated all MEDEVAC assets for the entire country. Following a 12-month deployment to the region, Parks voluntarily grounded herself by returning to school and furthering her civilian education. She earned her master’s degree in nurse anesthesia from Franciscan University in Baton Rouge in 2012 and served as chief anesthetist at Garden Park Medical Center in her hometown of Gulfport, Miss., from 2013-2019.

While employed at Garden Park Medical Center Parks completed the Doctor of Nursing Practice program at USM in 2015. It was during a deployment to Afghanistan in 2019 that Parks received and accepted an offer to join the USM nursing faculty.

As the simulation coordinator in the Nurse Anesthesia Program at USM, Parks and her colleagues structure simulation scenarios that include cognitive, affective, and psychomotor domains of learning. When she’s not in the classroom or a clinical setting, you may find Parks participating in Army simulation training seminars or overseas mission trips like the one she took in May to Honduras.

Parks’ association with the Harrison County Sheriff’s Office began prior to her Army enlistment and well before she learned to fly helicopters. Like a gym rat who yearns for a crack at the big-time spotlight, Parks volunteered at the department’s hangar to wash helicopters.

“As the former chief pilot tells everyone: ‘she wouldn’t go away,’ recalls Parks. “It wasn’t glamorous work, but I wanted to be part of the aviation team once I became a pilot and hoped that they would give me a chance. I also trained with the police academy cadets for their morning physical training and ran with them so that I would be in shape when I left for Army basic training.”

Grit and persistence paid off as Parks climbed all the way up from helicopter washer to senior pilot in the department’s aviation unit. Hendry notes than even though Parks works only part-time for the department, her skills, experience, wisdom, and innovation have proven invaluable.

“Pilotage is written in her DNA,” said Hendry. “Her commitment to safety, success, and the future of our aviation unit is unwavering. The military experience she has is a bonus for us. It ingrained discipline, trust in procedures, and a fearlessness in her that I can see every time she gets in the pilot’s seat.”

“When I was a new pilot our personalities clashed,” he confided. “I thought I knew it all and talked more than I should have. However, we’ve come a long way together, and I’ve grown and matured a lot with her help.” 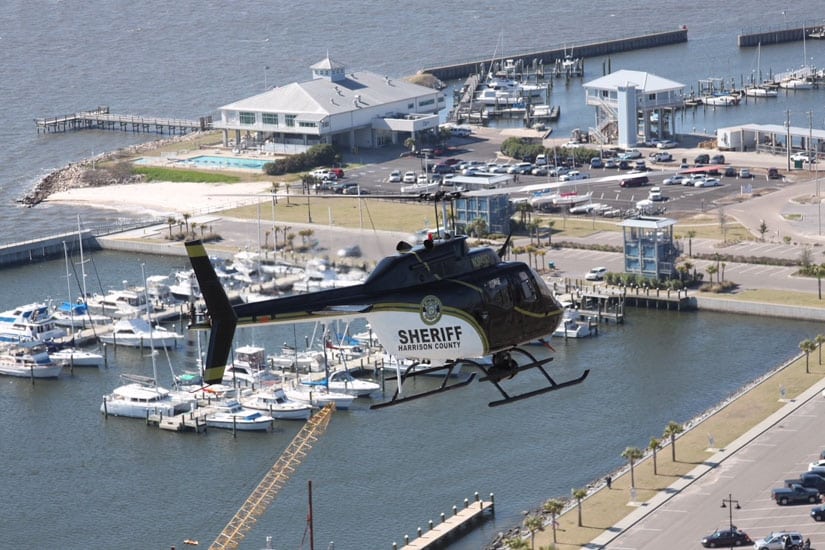 Just imagine sitting at the controls of a machine that weighs approximately 13,650 pounds – an aircraft that can bob and weave through mountainous terrain; rise and fall like a dragonfly and land in the unlikeliest of places. Parks insists there is nothing like vertical flight.

“I have many friends who fly planes, and I like to remind them: ‘But can you fly sideways?’ Or I ask, ‘Can you land anywhere?’ Due to our law enforcement missions, we fly very unpredictable routes,” said Parks. “Especially during an active pursuit, I fly in every direction trying to keep the target in sight. If they exit the interstate, so do I, but at 1,000 feet in the air.”

There is undeniable exhilaration that comes from swooshing through the air as a helicopter pilot, but Parks say the experience often yields a more significant payoff.

“Being a pilot requires great responsibility and preparation, but has a greater reward,” she said. “I’ve been involved in numerous lost personnel missions when we’ve successfully aided in the safe return of a lost person. We often fly on missions with multiple agencies over both land and water. My ability to fly above a scene often gives situational awareness to the ground personnel that is otherwise impossible.”

“I’ve only had to declare an emergency once, resulting in an emergency landing,” said Parks. “The Black Hawk helicopter has two engines and two engine oil caps. One of my engine oil caps failed during the flight, and I lost enough engine oil to cause one of the engines to overheat, requiring engine shutdown. After waiting for the ambulance to arrive at the airfield, we landed with one engine. To this day, I check the engine oil cap on every pre-flight to ensure its condition and security.”

Parks explains that the hardest part of aviation involves the pilot’s decision-making throughout any given assignment.

“The aircraft is capable of performing the mission, but the pilot has to make the decision to fly and constantly assess the risk associated with each decision,” she said. “Do I have the weather to safely perform the mission for the entire duration of the flight? Is the landing zone safe and suitable for the aircraft? Do I have enough fuel for the mission? Did the pre-flight identify anything deficient in the aircraft? Am I too heavy to fly this mission due to the number of personnel on board? Am I physically capable of performing this mission?”

Critical questions for sure. Ones that only a trained, experienced, confident pilot can answer.

“A pilot’s judgment is the best determinant for success in aviation. You must be aware of the limitations of your aircraft and yourself,” said Parks.

Female helicopter pilots occupy a sparse faction within the U.S. Army’s aviation ranks, representing less than five percent of all helicopter pilots. Parks is working to reverse that trend as a member of the world’s largest female profession pilot organization – The Ninety-Nines. Founded in 1929, legendary pilot Amelia Earhart became the group’s first president in 1931.

The Ninety-Nines provides networking, mentoring, and flight scholarship opportunities to recreational and professional female pilots. Parks serves as a leader in the organization’s Professional Pilot Leadership Initiative, mentoring and supporting other female pilots during their professional aviation careers.

Though her active miliary career ended more than a dozen years ago, Parks remains a member of the U.S. Army Reserves, where she holds the rank of major. She has logged more than 2,000 flight hours in five different airframes and is currently training to become a certified flight instructor.

Parks still lives in Gulfport with her partner, Amy, and their beloved pets – a Doberman named Grace and cats, Sophie and Bella. As hard-nosed as they come in a cockpit, Parks has an endearing, sensitive nature as well, according to her long-time friend Hendry.

“The most important part to Stephanie I’ve gotten to see - that she doesn’t share with everyone - is her sweet, kind, gentle spirit,” said Hendry. “She truly cares about others above herself. She is constantly sacrificing her wants for the wants and needs of others, even when it is undeserved or unwarranted. She loves people.”

The only thing she may love a little more? Being cleared for takeoff.